The Dynavap Vapcap vaporizers are one of the most affordable and popular dry herb vapes available! The Vapcap M is just $79 and is my #1 pick on my Best Budget Vapes!

While the Vapcap has served as a kick-ass vape with ground-up nugs of cannabis, it hasn’t excelled at marijuana concentrates at all. There were options, but nothing worth wasting your wax on.

The Dynacoil is a Titanium insert that forms a coiled wick inside your Vapcap bowl. The coil’s surface is intricately designed with jagged edges and patterned holes to increase surface area and evenly spread the concentrate as they melt and vaporize.

Is the Dynacoil Worth It?
Value is a subjective opinion and everyone perceives it differently. For 25 bucks the Dynacoil works very well, far better than other Vapcap concentrate methods (hemp fiber, rayon, ss pads).

Using the Dynacoil
Remove the screen from the tip of your Vapcap vaporizer. Insert the flat side of the Dynacoil first, leaving the toothed side out.
Place a small (rice-sized) dab into the toothed area of the Dynacoil and place the vapcap over the tip.
Heat your vapcap as normal, giving it an additional one-second heat-up on the first two heat cycles.

Adjust your heating technique to achieve desired results.
The Dynacoil can produce face-melting dabs with the right torch technique.

How Messy is the Dynacoil?
The devil is in the details here. The Dynacoil is surprisingly effective and efficient with small dabs. Rice-grain-sized dabs melt and vaporize quickly and evenly with minimal reclaim and mess.

The Dynacoil can handle bigger dabs, too, but the heating technique is slightly more work and there is more reclaim left behind.

Where to buy the Dynacoil

Make sure you’re getting the real thing! Buy directly from Dynavap or one of their authorized reseller!
Use code “vapezone” to save 10% at www.dynavap.com.

The Dynavap Vapcap vaporizers are one of the most affordable and popular dry herb vapes available! The Vapcap M is … 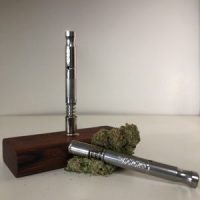 Must Have Accessories for the Dynavap Vapcap

Updated June 9, 2022 The DynaVap VapCap is a portable dry herb vaporizer with a thriving community of followers. The …

The DDave Water Wand is an all-glass replacement body for the Dynavap Vapcap. The Water Wand replaces the stem and …